URGENT MOVING SALE: PART THREE: I have four days to clear out as much of my stuff as possible before moving cross-country to a smaller home. D:

URGENT MOVING SALE: PART 2: I have two days to clear out as much of my stuff as possible before moving cross-country to a smaller home. D:

URGENT MOVING SALE: PART ONE: I have four days to clear out as much of my stuff as possible before moving cross-country to a smaller home. D:

Wanted to say more about new/final season but will have to do it later. If you are a fan and not watching the recap right now (I am even though I finished six-week 1-5 rewatch last night):

My friends saw hour 1 on Saturday night on the beach in HI but I've managed to stay unspoilt. If anyone is interested in their red carpet pics I will post links.

Michael Emerson would be great at nature film voice overs. "In the spring, the ice thaws and all the tiny creatures awaken..." lol.

To my regular FL - ignore this post, it relates to Lost University. Will be back later today.

I stopped being able to remember more than pieces the same year my current doctor says I started to get sick from the Cushing's. Like standing on a breakaway floor that fell into darkness one tile at a time. Maybe the worst part is not knowing which tiles broke because I was ill; maybe knowing that it could have been diagnosed sooner. Maybe only being aware of it now, with that spigot of chemicals turned off. That is a strange and heavy kind of loss.

Hindsight, they say, is 20/20; but it's quite a bit blurrier for me. I can't afford to try and look at that hazy picture and attempt to figure out what went wrong why. I have to start over and accept that any casualties were unlikely to have been solely my responsibility. Everyone makes choices. Even "under the influence", so did I, and there's nothing to be gained by second-guessing them now.

As they say in Lost: Whatever happened, happened. They also say that everyone gets a second chance at life. (On the downside, they have a smoke monster.) I know less about where the road ahead is leading than ever but I am certain that it has to be better. I just hope it doesn't take a plane crash to get there.

Tired and headed upstairs, but wanted to get this out of my head before bed. I had Lifetime on this evening, solely because I saw Kristin Chenoweth's name in a movie description and thought I'd watch a minute. During the ads, they were running spots with Tim Gunn; I assume "witty commentary on the holidays" was the intent. I'm paraphrasing, I admit, but I ran it by my mother who was also in the room, too. The spot was roughly:
"Nothing says I care better than a homemade gift. Unfortunately, nothing says 'cheapskate' better either."

Wow, Tim. Way to seize upon the spirit of giving AND the zeitgeist. I'm pretty sure that's non-denominational stupidity. Second time this year Tim Gunn has made me turn off the television; maybe I should thank him.

Spending *time, love and effort* on a gift is far more important than spending *money*. I'm sorry for anyone who lives in a place where they don't see it that way.

Octopus encounters 101:
Octopus A - We both know one of two things is going to happen; either we're having sex, or I'm going to eat you.
Octopus B - Either way, IT'S ON

While the earlier evening featured mad squid lovin', alas this encounter ended in strangulation and cannibalism. I'll leave the conclusions to you.

I also just heard them say something about "wrasse and cod", and incorrectly auto-filled as "wrasse and khan" . . . x_X;

I'll try to post something of import later, if I can manage to stay awake . . . it will include things not relating to sealife :P For now I'm too distracted by adorable embryonic octopi.

Yes I'm quite late. No, it's not likely to get read. But here you go anyway.
Read-along photos at Flickr, click to begin (first photo is boring, starting with this one lol): 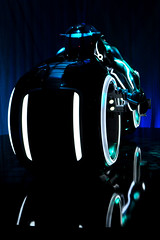 Because Flickr Uploadr was having some kind of issue, the photos are NOT in order in the photostream; you must use the Set navigation.